I'm a Scientist: Supported by Wellcome and UKRI
Skip to content

About the Thulium Zone 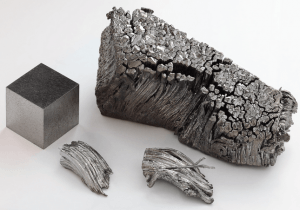 Very pure Thulium, one of which has been remelted into a cube. | Image by Alchemist-hp

Thulium, pronounced [thew-lee-um], is the 69th element in the periodic table and one of the lanthanide metals. It is never found in its pure form in nature, and has to be extracted from mined minerals.

Thulium is a very soft metal and can be cut with a knife. It’s used to make lasers surgical procedures and radioactive versions of it are used to produce X-rays for use in cancer treatments.

This is a general science zone, where we will meet five scientists from different areas of science.

There is a scientist who looks at what it is about our DNA that makes us different from each other, another who uses a printer to make extremely thin solar cells, and another who looks at your brain’s electrical activity when you’re awake and when you’re asleep. There is also a scientist who is finding out what distant galaxies are made from, and another who researches the why some viruses don’t affect us much, while others will make you really sick.

ASK the scientists any questions you have about science.

CHAT with the scientists in a 30 minute long text chat booked by your teacher.

VOTE for your favourite scientist to win a £500 prize to spend on communicating more science.